It’s not that potential customers don’t trust what you’re saying about yourself in your marketing. It’s just that… they don’t!

They need to trust you first, and to do that they need more than the words you’re saying.

Think about it. When you go shopping for a car or need some kind of work or service at your home or office for something you don’t do, don’t you ask your friends, family members if they know someone good?

We’d rather not be a guinea pig, or worse, be taken advantage of!

When it comes to your contracting business, sales coaching is the key to driving phenomenal sales.

But, how can you effectively coach sales without a repeatable-documented selling system to train Techs how to do sales the right way? The answer is you can’t.

The Tech selling system I teach has five steps. Each step needs to be taught and demonstrated in a certain order because one step builds on the other. If you skip steps, the system falls apart and sales suffer, as does customer satisfaction, a lose-lose scenario that can be avoided!

The five steps are:

Documenting this sales system has been documented and training your techs on it is only half the battle, however. To gain traction and build a good sales culture over time you will also need to provide never-ending sales coaching for it.

Why Buy Another Contracting Business Book?

Is there a shortage of business books out there or business information out there on how to be successful in the contracting business? Nope!

Can trying to figure out what to do with all that information be overwhelming and confusing? Yes!

When I got smarter at the work our company did, I liked to show off. I’d use big fancy terms and technical jargon that I thought would totally impress the customer I was in front of as either a Service…

A Commercial Sales Agent is the person at your company who would be tasked with generating new commercial accounts that provide sales for commercial install, maintenance and service work.  And for strengthening and maintaining healthy business relationships with the commercial…

What is a sales acronym? It’s a shortcut to remembering the key steps your Service Techs must follow to have a repeatable sales approach to running a service call. Make no mistake. Great sales come from a great sales system….

IT’S A DRUG AND WE’RE HOOKED!

This is what I said to my brother, Richie, about the fix I felt we got from doing monster commercial and residential jobs for a lot of dollars that generated little to no profit, no profit or sometimes a loss….

Improving sales is just like everything else in your business you want to improve. It goes a whole lot better when you’ve got a plan and you’re prepared. To make quality sales, we need a documented systematic approach and practice…

Family, Friends and House of Worship

It’s as inevitable as death and taxes. Be a contractor long enough and you’re going to end up selling stuff to your family, friend or house of worship. Here’s another axiom that is true. When something can go wrong, it’s…

Get the 7 Power Contractor Book 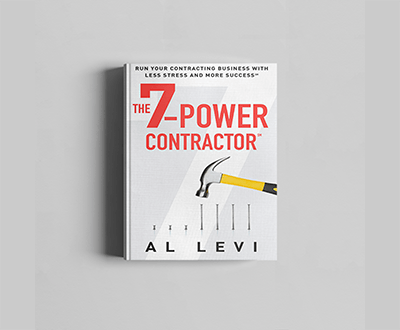