90% Chance Nothing Bad Will Happen

There’s a 90% chance nothing really bad will happen at your company if you spend at least two hours a week disconnecting from your business to work on it. BUT, there’s a 100% chance that failure is imminent if you’re unwilling to do this.

What separates the most successful contractors I’ve worked with from the ones for whom success eludes them, has nothing to do with how smart they are or their being in the right marketplace or anything like that. It was their ability to focus on getting things implemented at their company.

I’ve had clients pay me a lot of money to come and work with them. I can tell you I don’t vary my approach all that much, but I don’t use a cookie-cutter approach. That’s because I do tweak it to fit the type of contracting business I’m working with and where the existing company is on the business spectrum when I first arrive.

The reason I’ve been hired over the years to help contractors is…the business has reached an impasse (otherwise I wouldn’t be there). The impasse is different for different owners. Either they’ve grown to a size where they’ve run out of hours in a day, days in a week, weeks in a month and months in a year to get it all done. They can’t figure out how to clone themselves, so they are stuck. I also work with fast growing companies where they have grown chaotically, and they have tried to hire and throw people at the problems because they too realize they’re stuck. Both types of clients learn quickly that these issues will continue until they commit to work on changing how they run their business.

The most successful consulting work I’ve done with clients over the years has been because the owner and/or the owner/management team have abandoned old habits that got them this far because they realize that these old habits are now holding them back. They know that they need a plan and that they have to work the plan to get things done proactively vs. reactively day after day.

So, how do these contractors get things done and succeed?

They dedicate two hour blocks of time on their calendar to continuously work on executing the business plan we’ve put together, and to get systems in place. This allows the contractors who have run out of time and can’t clone themselves to grow their business. And for those fast chaotic companies, they can continue to grow their business but in a more sane and repeatable way.

Which contractors struggle to gain control and get where they say they want the business to go?

Owners who cling to what they have been doing because it feels too hard to change their ways. This means they fail to commit to working in focused two hour blocks to get things implemented based on the plan they signed off on.

Here’s what I can tell you:

There’s a 90% chance that nothing really bad will happen if you adopt this two hour time blocking habit. But there’s a 100% chance that things will continue to fall apart as you’re headed down a path that is likely to lead you to failure and burnout.

A story I like to share is of a contractor who wanted to come to my Build Your Operating Manual Workshop I held recently here in Phoenix. He called me and said he knew how much he needed manuals at his business, but he wasn’t sure he could get away from his business, let alone get it done and working at his company when he got home.

I assured him that I had setup support for him and that on my watch I’d do my best to help him if he was willing to change his old habits. So, he came to the workshop and told me it was the first time he had left his business in years for fear it would all fall apart if he was away from it. This caused me to check in with him after each day of the workshop to ask how it was going back home at the business. He shared that the staff had picked up their game and they were managing just fine (which surprised and delighted him).

In our follow-up calls once he got home, I asked him how he was doing, and he explained that he had good intentions but he was just so busy managing the day-to-day that he couldn’t work on the manuals he knew he desperately needed.

I told him to let his office know that for two hours on Tuesdays and Thursdays he was going to close the door to his office and work on the first 3 key manuals which are the CSR, Dispatcher and Tech Manuals.

When I followed up a few weeks later, I asked how it was going and he shared that he would peek at his phone to see if anyone texted him, he’d look at email to see if anything was needing his attention and then the two hours would just flitter away.

I told him to let the team know that he was going to be shutting off his phone, so he wasn’t going to respond to phone calls, texts or emails. And he also told the team that unless the building was literally on fire do not disturb him, because the work he was doing was going to make all their lives better and nothing was more important than that.

Two weeks passed and I called him to see how things went and he was positively giddy when he shared that working in undisturbed two hour blocks was how he had finished the minor editing he needed on the manuals. They were already into rollout and the staff was loving it. He then asked me what else can we do now. To which, I told him to build in at least 2-two hour blocks on his calendar preferably on a Tuesday, Wednesday or Thursday because Mondays and Fridays as contractors is just too tough to get this done.

Moral of the story?

Until you commit to picking a goal that is objective and commit to working on it until you either succeed or fail for trying, nothing really good can happen in a long term sustainable way. Remember, 90% chance that nothing really bad will happen for working on your business in two hour blocks but there’s probably a 100% chance that failure is around the corner if you don’t. 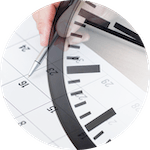